3 weeks ago, we lost the youngest member of the family. Olivia Mae was 2 years old when she passed away unexpectedly.

Olivia was born with a condtion called Hydroencaphaly. Basically, part of the brain does not develop (properly or at all) and is replaced by cerebral fluid. In Olivia's case, this was a direct result of having suffered a stroke in utero. There really is no explanation as to why this happens. There 'may' be a genetic component but even that is somewhat speculative. 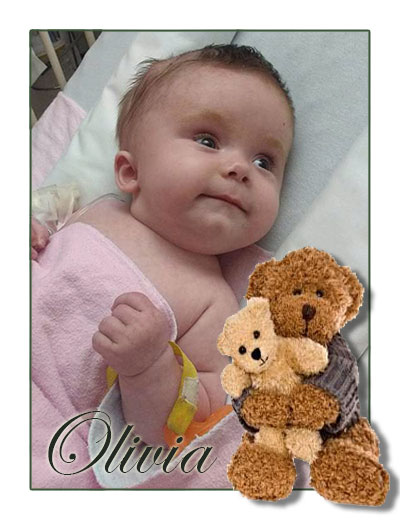 So, this little girl fought for life since before day one. She was expected to live only a few days, but she flourished and beat all sorts of odds. She was a fighter. I'm ok with letting her go, if she just didn't want to fight anymore. I'm not ok with the pain and despair this brings to her parents. I'm not ok with having to stand by and not being able to do a damn thing to help them in their grief.

And sadly, instead of bringing different fractions of family together... instead of rallying around Matt and Courtney, there seems to be much discourt, grudges being kept alive, and selfish agendas being pursued. Which brings me to "Life is so short."

There are many sayings about how tomorrow is not a guarantee, etc. But, do we actually believe that and act accordingly? Do I?

I know that I make efforts to be loving and non critical but perhaps, I'm not as successful as I think. If someone (especially someone I love) acts in an unkind, unloving way, I clearly get my nose out of joint. In fact, it weighs on me for days on end. This needs to change. I need to change. Life is too short for this sh*t, dammit!